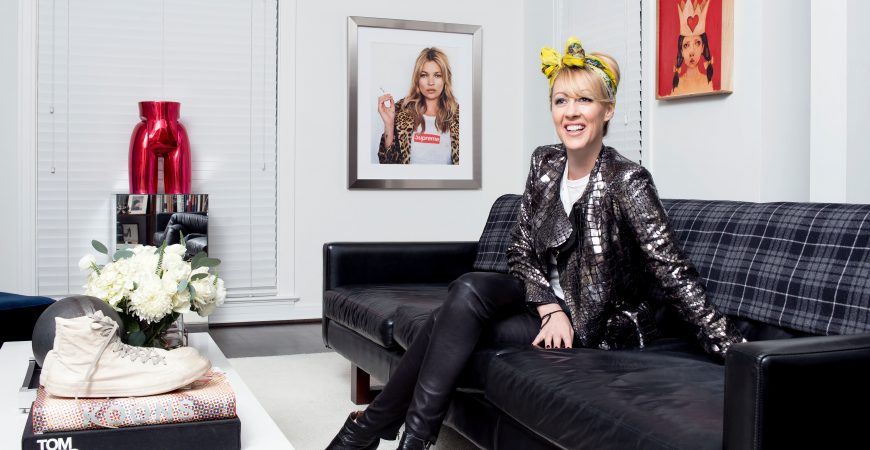 The Office of Angela Scott is more than just a luxury footwear brand worn by celebrities like Cate Blanchett, Taylor Swift and Julia Roberts. It represents the collective power of all women. Angela Scott founded her company after she truly got an understanding of what it means to “keep up with the boys.” Tired of running behind her male counterparts on construction sites in high heels, Scott wanted to prove that a woman can be confident, sexy and intelligent in shoes that are high-quality and comfortable. She founded the company seven years ago and until recently only had herself and another employee working on the brand—talk about lean and mean! Not only that, but the company is woman-owned, woman-run and woman-funded—the perfect trifecta. She calls herself a “working designer” which translates to she does it all. This fierce entrepreneur took some time to chat with me about her career evolution, what it’s like to work in a male-dominated industry and what the future holds for a brand dedicated to supporting women through their achievements.

Caroline Castrillon: How did your career evolve to where you finally launched your own shoe brand?

Angela Scott: I’ve always had a love for fashion, specifically footwear. When I was a project manager on construction sites, I really got an understanding of what it means to “keep up with the boys.” In my early twenties, I used to tell myself that I had to dress a certain way to be taken seriously—you know, the pencil skirts, the high heels, and most of the time it was me running behind these groups of men on job sites trying to look professional and keep it all together—it felt a little insane. I wanted to change this concept of women running in high heels behind men. A woman can be confident, sexy and intelligent in comfortable shoes. Then, when I worked in PR at Neiman Marcus, I had that concept in the back of my mind. I worked with many designers, these big brands that I thought were so huge, but were actually just a couple of people doing a ton of work behind the scenes making it look bigger than it was. That’s when I really got the confidence to take the leap.

Castrillon: What was it like working as a female in a male-dominated industry?

Scott: It’s funny because things haven’t changed much! The footwear industry specifically, is very male-dominated. Also, I have to say in the beginning, it was really tough getting respect, especially at the manufacturing level. I’d walk into a room, and everybody would shake hands except for mine. When they realized that it was my name on the shoes they were manufacturing, even then they would direct questions to the man standing closest to me. I mean, it could be the guy that drove me there! So, it was a bit tough. I think the lesson that it taught me was that a woman should assert herself and that’s not a negative thing. We should be forward, and we should also be eloquent, confident and take ourselves seriously because if we take ourselves seriously, everyone else in the room will too.

Castrillon: What were the early years like when you first started?

Scott: We bootstrapped the company, so it was a little crazy in the beginning. The first two years it was literally just me—I would work on packing, shipping, labeling, accounting, design development, marketing and photography. Then, eventually, I hired an intern who later became an employee. We ran the company, just the two of us, until a little less than a year ago. I don’t think you realize how much you can accomplish until you have to.

Castrillon:  That’s amazing. I read that you had two people working on the brand until recently and I almost didn’t believe it.

Castrillon:  Why did you decide to position the brand as one that celebrates the power of women?

Scott:  The women’s footwear industry is all about sexualizing women. I wanted to change that concept, and instead of sexualizing them, I wanted to give women strength and confidence. There’s nothing more beautiful than a woman’s strength, and we need to celebrate that.

Castrillon:  How did you come up with such a unique name?

Scott:  It’s one of those things where the shoe brand isn’t about me. I didn’t want it to be Angela Scott. It’s really about a collective of women. It’s about mothers, lawyers, doctors, marketing directors and writers. It’s about women who mean business. So, the name represents the collective power of all women.

Castrillon:  Do you have any female mentors that have inspired you along the way?

Scott:  My first female mentor was my business partner. She showed me what it means to be a confident woman with elegance. I watched how much she gave to others and her dignity and grace when it came to being a woman, both professionally and personally. After the first two years when the company started to have legs, she really believed in me and gave me an opportunity to continue to grow. When she became an investor, she taught me the importance of women supporting other women. Also, she showed me that The Office of Angela Scott was something that could be much bigger than just a shoe company—that we could inspire other women to support one another. By giving women a shoe that supports who they are, we can give women confidence—like being a small part of putting pride into their steps.

Castrillon:  What is it like having an all-female team?

Scott:  We’re a crew of really diverse women. We are all so unique because the ages range from the early twenties to mid-forties and it’s just a very inspiring environment. There’s no cattiness. I think because we’re all so excited about the journey and what we have ahead of us, everybody is very supportive of one another. It’s super cool.

Castrillon:  How do you see the company evolving in the coming years?

Scott:  My end goal is that I want us to be a resource for women to celebrate one another. So, whether your best friend just got a job offer, a raise or finished a marathon, I want to be that brand you go to to buy your friend a pair of shoes or some insane leather goods. I want to be a brand that supports women through their achievements.

Castrillon:  Did you get any good advice along the way when you were building the business?

Scott:  I have a friend who was in the fashion industry and had a very successful company he sold. He said, “Just remember, after ten years of hard work, I was an overnight success.” I thought that was so great. Ten years later, people were going, oh my God, your brand is an overnight success—but they didn’t know him for the ten years that he was hustling. I think that was an excellent piece of advice. It’s going to take some time, but remember, just keep going.

The conversation has been edited and condensed for clarity